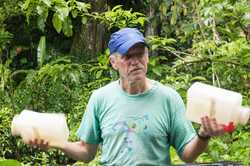 David Reznick
Distinguished Professor of Biology
University of California Riverside
Website
email
I began my work on Trinidadian guppies in 1977, when I was a graduate student at the University of Pennsylvania.I was inspired by John Endler’s presentation at the Academy of Natural Sciences in Philadelphia, where he described his research on how predation and femalepreferences worked together to shape the evolution of the beautiful and diverse color patterns displayed by male guppies. My general interest then and now is in studying the process of evolution by natural selection from an experimental perspective and testing evolutionary theory in natural populations.
My initial attraction to guppies was John’s characterization of natural variation in the risk of predation they experience in the streams of the Northern Range Mountains of Trinidad.Downstream populations of guppies co-occur with a diversity of predators.Waterfalls exclude predators but not guppies from the upper portions of streams and tributaries.This contrast between guppies living with and without predators, sometimes only meters apart from one another with a waterfall inbetween, is found repeatedly in different rivers throughout the NorthernRange Mountains. We can thus think of these rivers as a natural, replicated experimentin which guppies are adapting to alternative environments.Guppies from high predation environments experience much higher mortality rates.  High mortality is associated with earlier maturity, a higher rate of investment of resources in reproduction, and the production of more and smaller offspring.  All of these differences have a genetic basis.  I followed John’s precedent of experimentally manipulating mortality risk by introducing guppies from high predation localities into sites from which they and their predators had previously been excluded by waterfalls.I also increased mortality risk by introducing predators into low predation sites over barrier waterfalls.  I found that life histories evolve as predicted by theory and in a fashion that is consistent with the earlier comparative studies.It is in this context that I also found that evolution by natural selection can be remarkably fast, on the order of four to seven orders of magnitude faster than inferred from the fossil record.
In later research I and my colleagues discovered that there are direct and indirect effects of predators. When predators are present, guppies are found at lower population densities and the populations are dominated by small, young fish.Per capita food availability is higher so guppies grow faster and have more babies. When predators are absent, guppies attain higher population densities, large, old fish are more abundant, and per capita food is less abundant. These results played an important rolein shaping our current efforts to study eco-evo interactions. I and my colleagues also showed that the evolution of life histories was accompanied by the evolution of the aging process, neuromuscular performance and body shape.
I have a different research program devoted to the empirical study of life histories in the fish family Poeciliidae, which includes guppies.The appeal of the family is that they all, save one species, bear live young, but they vary in how mothers provision their offspring.Some fully provision eggs before they are fertilized. Others instead provide most resources after fertilization, via the functional equivalent of a mammalian placenta. I and my colleagues found that the placenta has evolved at least eight times in differentbranchesof the family tree.This diversity has made it possible to study evolution on a different scale, which is the evolution of complex organs.I have also become interested in the phenomenon of intergenomic conflict, in this case the conflict between a mother and the offspring developing inside her, and how such conflict can contribute to evolution.